Taking this a step further, we then examined the relationship between the HCAHPS Star Rating in comparison to response rates.

To be clear, there are several star ratings that are applied to hospitals based on different performance criteria. The Overall Hospital Quality Star Ratings are the stars that appear next to the hospital name when searching for information on the Hospital Compare website. These star ratings consider HCAHPS scores, as well as several other quality indicators that are publicly reported on Hospital Compare. Overall Hospital Quality Star Ratings were made public with the intention to be refreshed twice a year. Using both publicly reported data and our own research methods, PRC analyzed the HCAHPS Summary Star Ratings distributions compared to response rates. In the below graph, response rates for all hospitals nationally are listed across the bottom; the colored sections indicate the percentage of hospitals at each star rating. 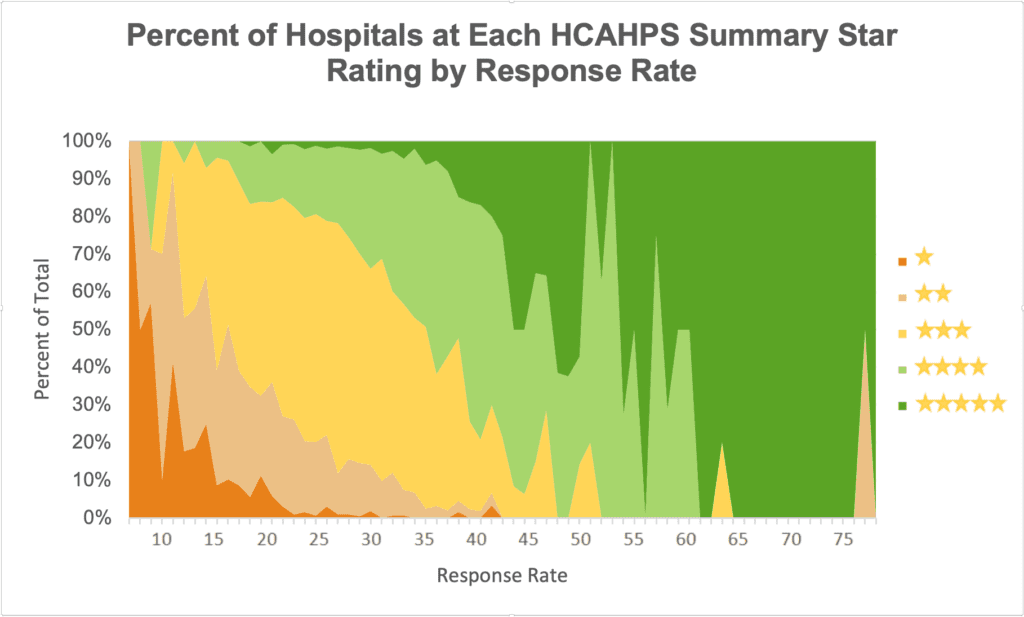 This data is noteworthy as it highlights the importance of obtaining a high response rate in relation to publicly reported star ratings. As HCAHPS survey response rate increases, the four- to five-star rating distribution increases. Of course, increasing response rate alone will not guarantee increased star ratings, but obtaining a representative sample of your total population may reflect a hospital’s true score. A representative sample will also help hospitals more accurately assess the quality of care they are delivering and opportunities to improve based on current performance.

Find this surprising? We agree! When a sample is truly representative of a population, these relationships would not exist, supporting the need to maximize your response rate to fully understand your patient’s experience.

PRC has some of the highest HCAHPS response rates in the nation. If you feel like your hospital has room to improve with an optimal response rate, please reach out to our team to help develop your true potential. And don’t forget to check out our HCAHPS page for more of our research!